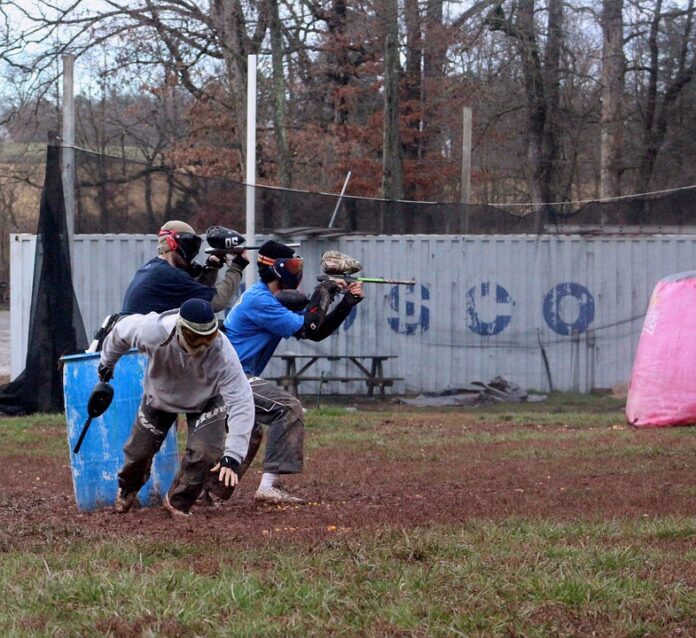 If you want to upgrade from a standard paintball marker to a more advanced model, an electronic paintball gun is something you should seriously consider spending your money on. In the past, electronic makers were considerably more expensive than basic models, meaning only the wealthiest of paintballers could afford them.

However, in recent years, most manufacturers have turned their attentions to producing accessible electronic markers for the wider market. Keen to see what all the fuss is about? Our guide breaks down all the things you need to think about when searching for the best electronic paintball guns.

Circuit boards are a staple of electronic paintball guns, providing full control over the commands that are sent to the coil. The vast majority of electronic markers provide you with a wide range of firing modes, including full and semi-automatic firing. Burst firing modes are also common, along with ramping firing modes that allow you to unleash more shots the more you pull the marker trigger.

They also require next to no maintenance. Therefore, they are very desirable for the less experienced paintball player. There are some downsides to this type of electronic marker, however. For one, they are not very efficient when it comes to consuming gas. You will therefore need to carry additional tanks with you during play. You will also need to rely on stealth.

Electronic sear trippers are another variety to think about. These paintball guns are very similar to mechanical markers. The key difference is that they use an electronic coil in order to activate the sear catch. These markers provide you with increased firing rates. They also tend to offer a broader range of firing modes. This type of electronic paintball gun is also very user-friendly and easy to maintain. If you want to experience the benefits of an electronic marker, but the want the familiar design of a mechanical model, sear trippers are worth thinking about.

Finally, there are pneumatic poppet valve markers. These electronic paintball guns deliver impressive firing rates and are very consistent. Unlike spool valve markers, they are also gas efficient. You can unleash a huge number of shots per tank refill. If you want a balance between consistent performance and efficiency, pneumatic poppet valve guns are probably the most suitable solution for you.

When choosing an electronic marker, make sure you are selecting a model that is easy to handle. Lightweight models are without doubt the most convenient option in this regard. A lighter build will also compensate for the added mass of electronic components. As with any paintball marker, a high-grade build will make for a good long-term investment. If your budget is substantial, look for markers made from cutting-edge materials, with polymer housing the ideal.

Tired of your current marker and looking to upgrade? It might be time to swap out your existing marker for an electronic model. Below, you will find our personal pick of some of the best electronic paintball guns your money can buy. To find protection for yourself whilst out on the field, check out the best paintball armor!

The Etha 2 from Planet Eclipse builds upon the strengths of its predecessor model, bringing some brand new features to the table. If you are familiar with the original Etha marker, you would be forgiven for thinking this new and improved paintball gun offers much of the same. However, the Etha 2 not only offers distinctly new aesthetics, it also operates very differently from the original mode. This marker is an incredibly hardy choice, with a robust composite construction. Inside, aluminium elements have been used to bring the overall carrying weight down, without compromising on performance.

Gamma Core technology powers the integrated spool valve drivetrain, while batteries can be quickly and easily changed thanks to the innovative lock-n-load system. You can also make quick adjustments and repairs to your marker thanks to the grip access system. A hose-less air transfer system also allows for a sleeker setup. Even with a bundle of brilliant features, this marker is a relatively lightweight option. The low-profile design and build makes it a particularly good option for those looking to gear up for speedball scenarios. 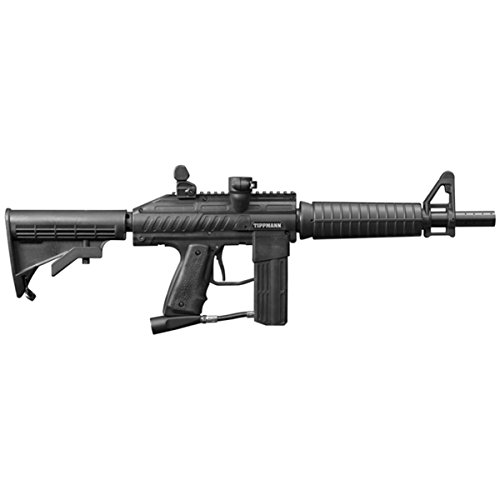 The Tippmann Stryker XR1 is a go-to choice for those after a powerful electronic marker that delivers consistent firing performance. This fully electro-pneumatic marker should certainly appeal to paintballers searching for a heavy-duty marker for high-octane matches. This premium marker incorporates a low-pressure spool valve design, along with four distinct firing modes. You can choose between semi-automatic and full auto firing, as well as ramping and burst firing output. With so much variety, this marker is an obvious choice for all types of paintball match.

This impressive paintball marker also boasts an anti-chop break beam eye system. You will also find an adjustable telescoping shoulder stock as a standard feature here. The military-grade aesthetics and meticulous attention to detail with appeal to the paintballer hoping for high levels of realism. There is also plenty of scope for adjustment, with accessory rails included so you can tailor your marker to your individual requirements with a host of different upgrades. 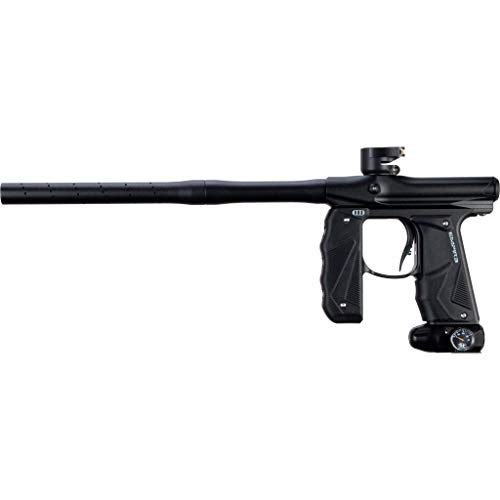 If want a smaller choice of marker that allows for swifter shooting on the field, the Empire Mini GS marker is made for you. This innovative paintball gun utilises circuit boards throughout its entire body, all but eliminating the need for wiring. You can also expect consistent firing and the best in efficiency with the Empire Mini GS, with a reliable inline poppet valve a standard feature of this impressive design. Other great features here include break beam anti-chop eyes, a fully adjustable trigger and a clamping feed neck.

You have a selection of firing modes to choose from here, with user-friendly adjustments allowing you to quickly select and tailor to your individual firing requirements. This marker also includes a wraparound rubber fore grip, as well as a through air transfer system that eliminates the need for air hoses. Should you need to make any repairs or undertake maintenance, you can do so easily with this marker, with only two small Allen keys required to carry out essential maintenance jobs.

A great deal of thought has gone into the design of the Empire Mini GS, resulting in a first class marker that ranks highly when it comes to lightweight carrying convenience, user-friendly operation and consistent performance. 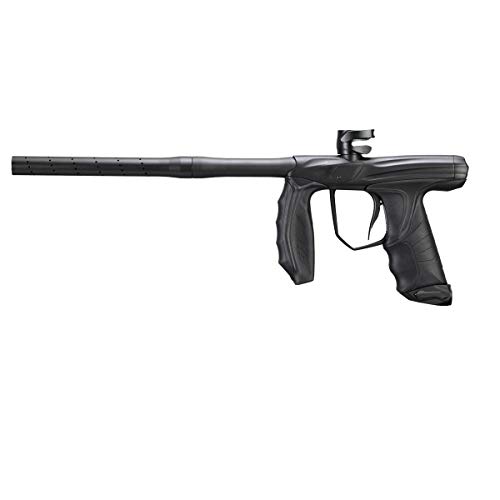 Like the many of the best markers from Empire, the SYX paintball gun is a low-profile solution that allows for maximum mobility. This user-friendly marker boasts a hose-free design, allowing for a sleeker overall build. This electronic marker is also incredibly easy to use, with a multifunction board with OLED display, along with a dual-button interface navigation that you to make quick selections. If you are completely new to the electronic marker market and are a little daunted by the prospect of wielding one, the Empire SYX is an ideal introduction.

The Empire SYX is also incredibly easy to maintain and upgrade. The battery and bolts can be quickly removed without the need for tools, meaning you do not have to worry about spending an age undertaking maintenance jobs while exposed to enemy fire. This marker will also impress with its firepower and consistent operation. A micro-honed two-piece barrel system and 7.5-inch control bore will ensure you consistently hit your targets. 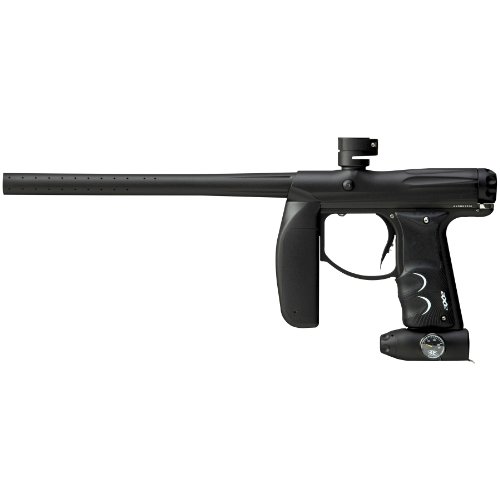 This Empire Axe paintball marker is a lightweight choice of paintball gun that offers high levels of firing accuracy and consistent performance at all times. The high-grade aluminium barrel is particularly effective at improving your accuracy rates, while the material also brings down carrying weight. This marker also utilises a unique push button bolt removal system. This allows for easy maintenance and means you do not need to worry about carrying tools with you during a game, freeing up your harness for more important accessories.

This marker also includes an Empire relay regulator and with an on/off lever, making the removal and replacement of tanks incredibly straightforward. An extended grip frame, along with a new and improved marker grip, also makes this gun incredibly comfortable to handle for long periods. You also have a variety of firing modes to choose from, with semi-automatic, ramping, NXL, PSP and millennium ramping firing modes all supported. 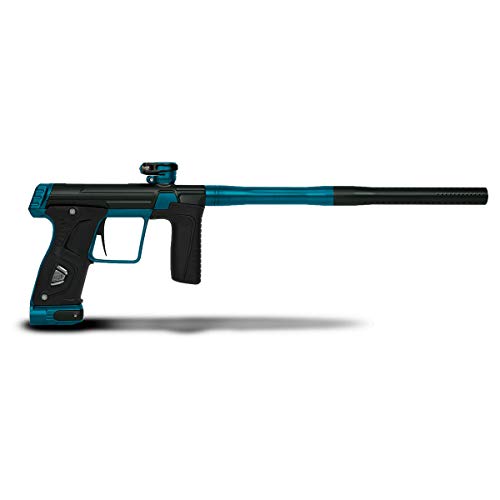 The GTEK 170R from Planet Eclipse has been a popular choice of paintball marker for some time. You only need glance over the impressive specs on offer here to understand why. A Gamma Core drivetrain is included as a staple feature here, making for a particularly effective marker that consistently delivers when it comes to precise firing performance.

Spool valve operation further enhances efficiency and ensures this marker will not let you down when it matters most. This is a very practical design, intended for paintballers who do not want to spend precious time carrying out basic maintenance. The quick-release bolt mechanism is particularly handy for those who do not wish to carry extra tools with them in their harness, while the overall time spent carrying out maintenance is minimal.

Also very efficient is the hose-less air transfer system, while the minimal design also makes this marker a more lightweight option for those who do not want to be weighed down by a bulky paintball gun. You can also expect good levels of operating pressure here, ensuring powerful firing performance, regardless of which firing mode you have selected.

This DYE M2 paintball marker demonstrates just how impressive electronic paintball guns be. This eye-catching marker includes a 1-inch Prism OLED interface, which utilises the Method operating system. This paintball gun uses minimal wiring, instead relying on wireless connection between the frame and the body. Effective internal pressure sensors are also included to substitute for excess wiring. This DYE M2 marker comes with a rechargeable battery, with USB charging supported so your paintball gun is always primed and ready to go when you need it.

Included along with the main marker frame itself are two Ultralite barrel backs, giving you plenty of scope for tailoring your gun exactly to your liking. This standout paintball gun also includes a -way control joystick, making it incredibly easy to handle, even when you are looking for precise levels of control and performance.