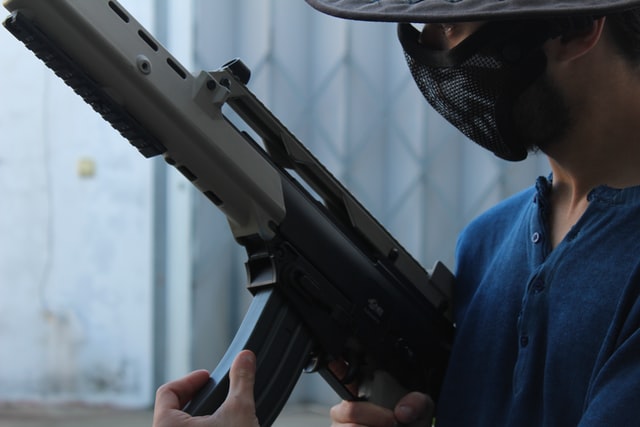 Paintball markers use a short burst of controlled air to fire a paintball round from the end of a marker barrel. This gas is usually housed within a CO2 cannister that is attached to the gun itself. However, other types of gas can also be used, such as nitrogen or conventional air. Paintball rounds are fed via a hopper into the internal firing assembly.

Rounds that leave the hopper for the firing assembly remain in place until you next pull the trigger to unleash a shot. Hoppers position paintball rounds ahead of the marker piston, moving forwards and pushing the paintball at high speeds in your desired firing direction.

How Do Paintball Guns Work

Depending on the exact model of marker you have, the firing assembly will differ slightly. However, in most cases, the firing assembly is made up of a gas valve which is protected against the consistent release of high-pressure air thanks to a seal. This also means that the internal bolt can be moved forward without causing any unwanted disruption to firing.

When the trigger is pulled, a sear is released. The sear is a small element that ensures everything is held in place when you fire. It also ensures that paintballs can be pushed forward and released at considerable speeds. The next action is ultimately determined by the exact type of paintball marker you are using. Pump action guns, semi-automatic guns, automatic guns and ramping guns all operate slightly differently and offer you varying rates of fire. Unless you are a traditionalist, you will probably want to avoid the archaic pump action paintball gun. Those after more rapid play will certainly want to consider one of the other main types of paintball marker, however.