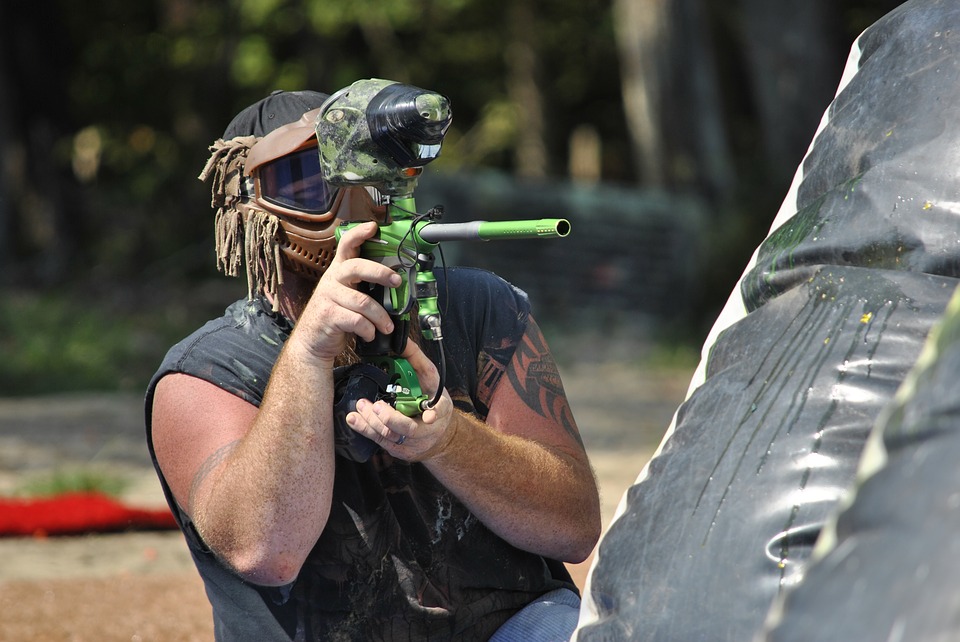 Nowadays, the question of paintball vs airsoft is a common one for those looking to enter the world of competitive team shooting. While both games are admittedly similar in many ways, the newcomer may struggle to make a decision on what game is the best for them. Below, we’ll outline the pros and cons of both paintball and airsoft, comparing the two to help you make the best decision which game is right for you.

Historically, paintball has proved more popular than airsoft. Paintball is a competitive shooting game where players utilise a range of guns (or markers) that are filled with paintball ammunition. This ammunition takes the form of small plastic pellets that contain measures of brightly coloured paint.

When a marker is fired at a target and a paintball makes contact, it ruptures and leaves a telltale paint mark on the victim. Depending on the exact rules of any given game of paintball, this marker will affect a playing score or serve to remove a player from the game entirely.

The paintball element of the game is perhaps one of its chief benefits. The stain left behind by paintball ammunition leaves no question that a player has been shot by another combatant. This removes the need for thorough adjudication during the game and negates the chance of competing players arguing an outcome. Paintball rounds usually deliver more than enough paint to leave a noticeable mark, further negating the incidence of disagreements. Paintball ammunition is reliable and consistent in its delivery and levels of accuracy.

Paintball rounds are noticeably heavier than airsoft ammunition, providing the player with reliable trajectories that aren’t affected by adverse weather conditions or environmental factors. Because of the design of paintball markers, namely the compressed gas or air used in the firing mechanism, longer range shooting is also a standard of paintball. To learn even more about the world of paintballing, check out our paintball faqs article answering 30 of top questions today!

The Downside of Paintballing

There are, however, some drawbacks to paintballing. For one, the high velocity of fired paintball rounds can prove painful. For information on how to stay safer out on the field, check out this blog post by Sadler Sports detailing how to prevent injuries in paintball.

Protective gear and clothing is a standard of paintball play, although even the most guarded player will have to deal with the pains of impact and potential bruising after an intensive day of combat. Types of protective gear include: elbow pads, knee pads, pants, boots, gloves and a trusty paintball mask. Click the links for each item to head to their buyer’s guide and reviews, showcasing some of the top products on the market today!

The paintballs themselves are also going to damage your gear and clothing every time you play, leaving behind unsightly stains from the paint itself. The best paintball ammunitions should really prove easy to wash off from clothing and gear after a session, but it is not always easy to ensure your equipment is spotless before playing again. This can cause a problem if you are not using different coloured ammunition each and every game and may cause disagreements on the day of play itself.

The cost of equipment and ammunition may also deter some. A paintball marker is the bare minimum you need to be able to play paintball, but even an entry-level model will set you back a reasonable amount. Likewise, the ammunition required to load your marker will require extra investment each and every time you play.

Compressed air containers also require replenishing on a regular basis, although this does not represent a significant cost. That being said, the containers themselves are often cumbersome and add a substantial amount of bulk to your marker. This will affect the usability of your weapon and potentially impair your performance unless you are fully accustomed to the additional load.

Paintball markers also require extensive maintenance to ensure they work correctly. Because of the many moving parts and removable components, you will want to ensure your weapon is primed for use before every game. Paintball pellets can potentially clog nozzles and other internal components, requiring you to undertake exhaustive maintenance or replace out elements entirely.

Airsoft works in much the same was paintball, but boasts some big benefits when compared to its paintballing alternative. The main difference is that the game uses spring-powered airsoft weapons instead of paintball markers.

Instead of small containers of paint, airsoft uses plastic pellets that can be loaded in the form of magazines into the main weapon itself. This ammunition type isn’t just more affordable than paintball pellets, it is also easier to load and means the weapon you are using doesn’t require a hopper attachment.

Another big advantage of using airsoft pellets is impacts are less painful. As such, you will not have to invest in a large amount of protective gear and clothing prior to play. Furthermore, airsoft ammunition does not leave behind unsightly paint stains. This means you will not have to spend countless hours cleaning your equipment and clothing after every combat session.

While airsoft seems like a convenient alternative to paintball, there are many drawbacks to this style of combat. In fact, when weighing up the question of paintball vs airsoft, you may decide that the apparent advantages of airsoft combat are in fact detrimental to the game overall.

For one, airsoft pellets are relatively lightweight when compared to paintball pellets. The overall trajectory of a fired round is harder to judge and as such, you will find it harder to take precise shots from greater distances. Those willing to put in the practice and grow accustomed to airsoft trajectories can overcome this challenge, but newcomers will struggle to make contact with their fired pellets straight off the bat.

It’s not just accuracy that is affected by the lightweight nature of airsoft pellets. The potential range of your shots is also severely limited. This means the less experienced player will have to engage in close combat scenarios on a more regular basis, negating the stealth aspect of the game.

One way to overcome the issues associated outlined above is to use heavier airsoft ammunition. However, these bulkier pellets will result in more painful impacts and any improvements in terms of range and accuracy are slight.

Paintball vs Airsoft: Other Differences

If you are prepared to adjust your playing preferences, airsoft can provide you with a rewarding combat experience. One reason why many paintballers are now turning to airsoft is that the latter game offers a more intense and high-octane atmosphere. Consider the firing speed of paintball markers, for example.
The vast majority of unmodified paintball guns will have a firing rate capped at 300 fps, with most paintball fields never allowing for a firing rate that exceeds this. By contrast, airsoft guns boast a far higher firing rate. In some cases, you will find guns that can fire up to 450 fps. This increased firing rate overcomes some of the adverse impacts of airsoft ammunition, including reduced ranges and impaired accuracy. However, it also makes for a more tense and energetic style of combat.

Now we have talked about the differences between the two sports, it is worth highlighting the similarities they share. The potential for injury is perhaps the main crowd ground between paintball and airsoft. Here, we are not talking about harm sustained from ammunition impacts, but rather the injuries that can befall a player in the field of play.
No matter whether you are playing paintball or airsoft, you will no doubt find yourself regularly dodging incoming fire, crawling through undergrowth and perched in uncomfortable positions for long stretches of time as you assess your surroundings. Because of this, you will need to keep your body protected from scrapes, scratches and impacts. This will of course involve a basic line-up of protective gear, including knee and elbow pads, goggles and perhaps some chest protection. This can all add up to a significant outlying investment.

Pick a Style of Combat to Suit You

Ultimately, airsoft provides players with a more realistic style of combat than paintballing. This is largely down to the more realistic design of the weapons used. This is further enhanced by the usability of airsoft gun. Compared to paintball markers, airsoft guns are more compact and lower in profile, requiring less additions like compressed air tanks that can prove cumbersome and limit movement.
It has to be said that airsoft combat will take some time in getting used to, requiring plenty of practice to overcome the range and accuracy impairments caused by the ammunition used. However, this will ultimately provide you with a more tactical combat experience that should prove more rewarding in the long run. Finally, airsoft can prove a more cost-effective alternative to paintballing, with airsoft guns significantly more affordable than the average paintball marker.