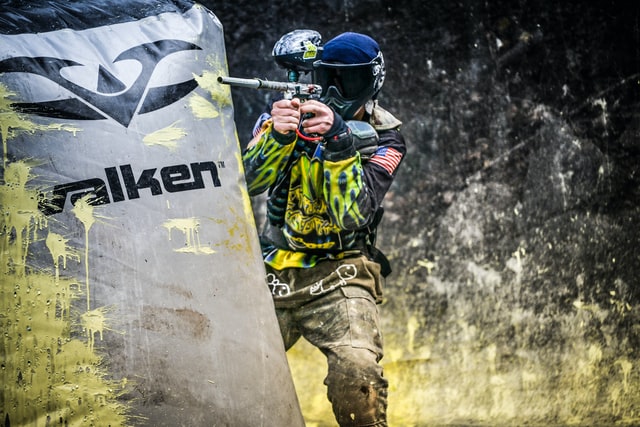 If you a relatively new to paintball, you have yet to become familiar with the various types of paintball guns available. Paintball fields often tend to rent out basic mechanical marker models, but there are many more options for you think about if you are looking to take up paintball as a serious pastime. Unsure of what you can find out there? Read on for our guide on the various types of paintball marker you may want to consider investing in.

The oldest and most basic type of paintball marker is the pump paintball gun. This type of marker includes a pump that needs to be pulled back and forth in order to line up the next paintball in the chamber so you can continue firing. These types of paintball gun are admittedly very simple, but they are incredibly reliable.

Pump action paintball markers fallen out of favour over the past twenty years as mechanical markers and electronic guns enter the market, however they still have plenty of fans. Many enthusiasts will use a pump paintball gun as their preferred marker when playing against other traditionalists.

If you are just beginning your paintball adventures, you should probably avoid pump action markers as they are far too limited when it comes to firepower and functionality. However, if you are looking to add to your growing collection with a classic, they might be worth considering.

Most people looking to buy a paintball gun will probably end up buying a semi-automatic marker. These mechanical paintball guns are fairly basic, but they are designed to be user-friendly and are straightforward when it comes to operating them. Semi-automatic mechanical markers require you to pull the trigger every time you want to take a shot.

They consistently perform and take the effort of unleashing rounds at the enemy. In addition to standard mechanical models, you will also find electro-pneumatic paintball guns readily available. If you are looking for an efficient paintball gun for recreational play, a semi-automatic marker is your best bet.

Many paintball guns are advertised as offering burst firing modes. Usually, burst paintball markers will allow you to deliver 3-shot bursts every time you pull the trigger. They are far more advanced than conventional pump paintball guns and have a distinct edge over semi-automatic alternatives. Essentially, if you are looking for a gun that will unleash more firepower with less effort, a 3-burst paintball gun is a good option.

However, some models will require you to use a key or small tool in order to switch firing modes. This is to deter paintballers from switching to illegal firing modes during specific gameplay scenarios. Those who are less experienced with paintball markers will probably find multiple mode guns difficult to get their head around, but they are worth looking into if you are keen to upgrade from a more basic model.

If you are searching for a speedball marker, look for one that delivers a ramping fire mode. Perfect for fast-paced paintball scenarios, ramping paintball are far more advanced than other options we have previously talked about. As with most gun models, you will need to pull the trigger in order to fire a shot.

However, these triggers are very sensitive and should be squeezed with varying degrees of force to affect the rate of fire you are unleashing. These markers fall into the electronic paintball category and use circuit boards in order to allow for ramping firing performance.

It can take some practice to perfect technique with an electronic marker with ramping firing. For example, you can pull the trigger three times to deliver three individual rounds. Pulling a trigger four times will deliver four shots. The best ramping paintball guns will allow you fire off up to twenty shots per second, although you may find many tournaments have a limit when it comes to significantly high firing rates.

While ramping paintball guns provide you with superior speed, you have to make some sacrifices when it comes to control. Speedball markers are rarely a good option for those looking for precision and accuracy, although longer barrels can help straighten out round trajectories and improve things in this regard.

These types of paintball gun have varying caps in place to limit the maximum rates of firepower you can expect to achieve. If you have specific requirements here, you should always consult the manufacturer information to determine how far you can push your paintball marker.

Those guns with a substantial firing rate tend to the most experience available, so they are not a good option for those with a tight budget. You will also find that these types of paintball guns are often banned for use in tournament play. However, they are popular with recreational players.

Full auto paintball guns can be very hard to handle, especially if you poor strength or are unfamiliar with bulkier paintball markers. If you want to use a full auto marker well in the field, you will need to train with them for a considerable amount of time.

These types of markers often fall into other categories, but they are defined by their military-grade aesthetics. Military simulation is a preferred gameplay scenario for diehard paintballers who want to recreate a realistic combat scenario in the field. Most MilSim paintball markers can also be classified as semi-automatic guns, providing you with reliable firing performance and decent levels of control.

Although these markers look the part, they are substantially more lightweight than genuine rifles. However, some manufacturers have gone out of their way to produce bulkier options that have a more realistic carrying weight. The US Army Alpha Elite from Tippmann is one such design.

MilSim markers can be customised with various accessories and include Picatinny rails for this purpose. This paintball guns can be tailored with carry handles, scopes and sights, magazines and more.

If you are an entry-level player looking for a basic paintball marker, a semi-automatic gun is probably your best bet. These user-friendly guns are lightweight enough that they can be carried with ease, while they are also well suited to the paintballer who needs a good level of control over their marker. Most semi-automatic mechanical markers can also be customised with a huge variety of extras.

If you think you might want to upgrade your marker at a later date, make sure you are purchasing a semi-automatic paintball gun that includes mounting rails so you can do just that. You will find no shortage of available options when shopping around for mechanical markers. Almost every brand manufacturing guns for the paintball marker will include a good selection of semi-automatic markers in their catalogue.